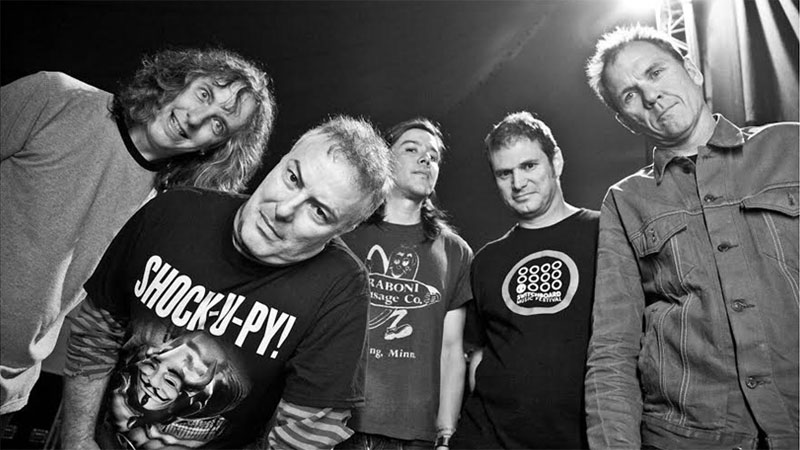 Inspired by Iggy Pop’s 60th birthday gig at the Warfield in San Francisco, Biafra laid plans for his own 50th birthday party and finally decided it was time to start a band of his own. Ten years before he had been attempting the same thing with the likes of guitarist Ralph Spight (Victims Family, Freak Accident, Hellworms) and drummer Jon Weiss (Sharkbait, Horsey). They had also previously worked with bassist Billy Gould (Faith No More) who was tapped for the new group. After cramming rehearsal for a month the four piece band known as Jello Biafra and the Axis Of Merry Evildoers took the stage in a sold-out two night stand at San Francisco’s Great American Music Hall and subsequently spent the next 9 months in rehearsal for an album project. Before entering the studio guitarist Kimo Ball (Freak Accident, Carneyball Johnson, Mol Triffid, Griddle) was recruited and the resulting twin guitar attack took the groups sound to new, noisier heights. The quintet now known as Jello Biafra and The Guantanamo School of Medicine began recording tracks for the upcoming LP/CD “The Audacity Of Hype” slated for release in October 2009, produced by Biafra and engineered by Hip Hop legend and long time Jello co-conspirator Matt Kelley (Hieroglyphics, Tupac Shakur, Digital Underground, Victims Family) at Prairie Sun Recording in Cotati, CA and San Francisco’s Hyde Street Studios.

The band’s second release, an EP titled Enhanced Methods of Questioning, was released on May 31, 2011. Controversy for the band arose after news was released of the band’s decision to play in Tel Aviv, Israel on 2 July 2011. Biafra received much criticism from the left and punk community in light of the artistic boycott put forward by the Boycott, Divestment and Sanctions campaign in 2005. On the 29 June 2011, Jello Biafra and the Guantanamo School of Medicine announced that their controversial show in Tel Aviv, Israel, was cancelled.

In 2012, the band, now officially including Andrew Weiss on bass and Paul Della Pelle on drums, entered the studio. The first song released from the session was “SHOCK-U-PY!”, a tribute to the Occupy movement, which was released in July 2012 on Bandcamp. That song will be featured on a single in fall 2012 and later on the band’s next full-length, White People and the Damage Done.