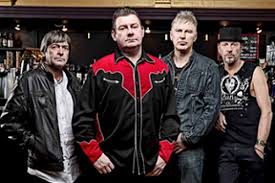 Prior to becoming Stiff Little Fingers, Jake Burns, vocals and guitar, Henry Cluney, guitar, Gordon Blair, bass, and Brian Faloon, drums, were playing in a rock music cover band, Highway Star, in Belfast. Upon the departure of Gordon Blair (who went on to play with another Belfast group, Rudi), Ali McMordie took over on bass. Cluney had by this time discovered punk, and introduced the rest of the band to it. They decided that Highway Star wasn’t a punk enough name, and after a brief flirtation with the name “The Fast”, decided to call themselves Stiff Little Fingers, after the Vibrators song of the same name.

It was while doing a gig at the Glenmachan Hotel that they first met Gordon Ogilvie, who had been invited along for the evening by Colin McClelland, a journalist who Burns had been corresponding with.

Ogilvie suggested they play material based upon their experience of the Troubles. McClelland arranged to get the band some recording time at a local radio station, and in the studio normally used to record jingles, they recorded “Suspect Device”. The single was packaged in the form of a cassette, with a cover depicting a cassette bomb, apparently causing great hilarity in the group, when one record company phoned them and asked for another copy, as they’d thrown the first one in a bucket of water for fear that it was a real bomb.

A copy of the single was sent to John Peel. He played it repeatedly leading to a distribution deal through Rough Trade. The single was released on the band’s own Rigid Digits label and sold over 30,000 copies. Peel later did the same with the first single by another famous Northern Irish band, The Undertones. There were a number of well-publicised arguments between the two bands; the Undertones accused Stiff Little Fingers of sensationalising the Northern Ireland conflict, while they retorted that The Undertones ignored it.

On 9 March 2007, Burns announced that Stiff Little Fingers would be recording a new album which would hopefully be completed by the end of 2007. They have previewed a track from the new album, “Liars Club”, at live concerts. The track is named after a bar Burns drove past on his way home whilst listening to a press report about Tony Blair, George W. Bush and the Iraq War. At the Glasgow Barrowlands gig on 17 March 2011 Burns announced that a new album was being recorded – hopefully for a 2011 release – before launching into a new song, “Full Steam Backwards”, about the banking crisis in the UK. On 16 October 2013, the band launched a project on Pledgemusic to raise funds for a new album to be released in March 2014. The project reached its funding goal within 5 hours. The title has been confirmed by the band as No Going Back with recording completed in January 2014 and was released first on 15 March 2014 through PledgeMusic and to the general public on 11 August 2014. A tour in support of the album kicked off in the spring of 2014 and included dates in the U.S. on the Summer Nationals tour which features The Offspring, Bad Religion, The Vandals, Pennywise and Naked Raygun. The album was the band’s first UK chart success since 1983’s “All The Best” and their first number 1 record on the BBC Rock Album Chart.