“Hundreds of young people had been waiting on the street for the show. Several picked up material from a nearby construction site and hurled the items at cars and windows, a witness said. At least four cars were overturned and set on fire. Flames were shooting out the side windows later as firefighters directed streams of water at them.
…
Angered by the cancellation of a punk concert in Montreal, dozens of people smashed windows and overturned cars, setting them ablaze last night (Oct. 14). The concertgoers, many of them youths sporting spiked-hair and cutoff denim jackets, rioted shortly after 8 p.m. when they were told the groups the Exploited and Total Chaos wouldn’t be performing at Medley Hall.”
-Billboard, 10/15/2003, https://www.billboard.com/articles/news/68647/montreal-fans-riot-after-canceled-show 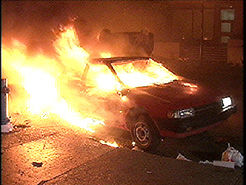 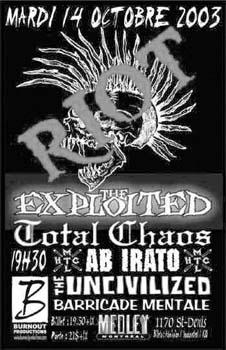