Théâtre Saint-Denis is an impressively enduring venue. It officially opened in 1916, and at that time was the largest theatre in Canadian history! It held 3000 seats, and initially presented silent movies in French, bedroom comedies, and operettas. Though Théâtre Saint-Denis has shifted in size, ownership, and presentation, it has always retained a fine attention to talent. 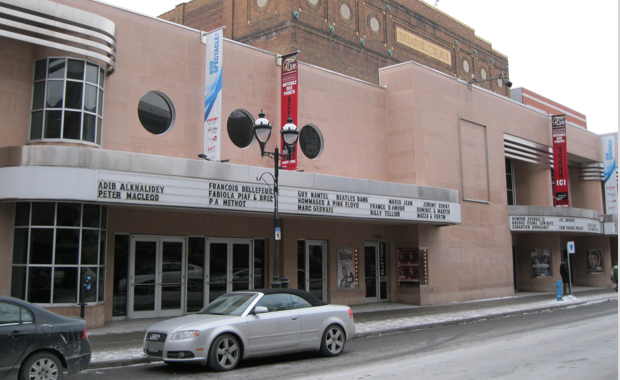 After two long years of work and $200,000 in construction costs, Théâtre St-Denis was officially inaugurated on March 4, 1916. At the time, it was the largest theatre in Canadian history and boasted a total capacity of 3000 seats. It originally presented silent movies in French,, bedroom comedies and operettas.

The 20s: home to major concerts

In 1920, the Theatre began welcoming major international orchestras, notably the Orchestra of Milan under the direction of Toscanini. Maurice Ravel also stopped by the Theatre during his 1928 North American tour to perform some of his own works.

Following a brief interlude of opera and comic opera, the Theatre went back to screening silent movies in early 1929. Of course, these were the glory days before the New York Stock Exchange crash, the Theatre frequently drew large crowds and coffers were well filled.

Just as the world was facing a major financial meltdown, the then well-known Barry-Duquesne theatre company set up shop at the Theatre, where it remained for eight months. It was eventually uprooted when the first French-speaking movies made their appearance in North America. And so it was in 1930 – 14 years after the Theatre first opened – that French films finally became a mainstay at Théâtre St-Denis.

Concerts make a comeback during the World War II

When film-making was interrupted in 1942, Théâtre St-Denis suddenly found itself with an urgent need to diversify its programming. Enter stage left the New York Metropolitan Opera (which would return yearly until 1945). The Bolshoi ballet, the Comédie Française and the Théâtre National de Paris would also grace its stages. Symphony orchestras and great conductors like Wilfrid Pelletier and Stravinsky were also invited to perform.

Some of the biggest French and international stars of their time paraded across the stages of Théâtre St-Denis: Maurice Chevalier, Fernandel, Tino Rossi, Luis Mariano, Yves Montand, Gilbert Bécaud, etc.

But that doesn’t mean cinema has been entirely abandoned. Lacking new releases, the Théâtre rescreened movies from the 1930s.

1950 arrived and Théâtre St-Denis underwent major reconstruction. Some $500,000 later, it had become the most sumptuous and modern theatre in all of Montreal – boasting several innovations and an increased capacity of 2,500 seats.

Once more, Théâtre St-Denis resumed its role as the leader in entertainment. On April 25, 1952, Aurore l’enfant martyre premiered and quickly became the most successful Quebec movie of its time. The Theatre also continued to present musical theatre and dance performances, as well as symphony and music hall concerts, right up until the opening of Place des Arts in 1963.

In 1971, Compagnie France Film added two other halls to Théâtre St-Denis and relaunched it as the Centre St-Denis. These two new halls were named the Chevalier and the Pierrot; later renamed the St-Denis 2 and St-Denis 3.

In 1978, management decided to diversify operations. Sensing that Montreal needed a theatre that could hold more than 2,000 seats, it returned the Centre St-Denis’s main theatre to its initial calling. The main room was completely remodeled into a concert hall, which filled an increasingly pressing need for both the art world and the Quebec public.

In 1990, the Centre St. Denis -still under the aegis of Compagnie France Film- was treated to a makeover in honor of talent, and became once more the Théâtre St-Denis as we now know it. The Théâtre St-Denis’ two halls were combined into a single hall that was refitted to accommodate 933 people. The interior design was completely revamped; only the outer structure was preserved.

On January 26, 1990, hall 2 was launched with a show by Jean Lapointe. And on April 4, 1990, following extensive renovations, hall 1 was officially inaugurated with a performance by André-Philippe Gagnon. This main hall now had 2,218 seats.

Since then, countless Quebec, Canadian, U.S. and international events have graced the stages of the theatre’s two halls, allowing it to pursue its mission and vocation in the field of entertainment. Théâtre St-Denis remains to this day a mythical and prestigious location attracting the biggest names in show business.